Two Fridays ago (February 17th),  Liz and I attended the California Association of Teachers of English (CATE) Conference in Santa Monica, CA, where we led a workshop on creating critical thinkers through the study of literature.

We had a group of 25-30 English teachers from around the state, all of whom were very nice and very engaged (and a bunch of them bought our book, which was super nice).

[We also had a really really great time! And we would have stayed the whole weekend but, you know…babysitters and kids and all that {thanks, by the way, to Liz’s mom, Ellen, for watching our kids}. And we really really want to thank the people behind the CATE Conference for having us! It was great! Thank you!]

The workshop was based on our book, Method to the Madness: A Common Core Guide to Creating Critical Thinkers through the Study of Literature, and began with the rationale for using quality literature to meet the common core standards (and that common core in the English classroom does not mean more informational texts and less imaginative literature). Our premise is that by building units around quality works of fiction, drama, poetry, and creative nonfiction, you can meet all of the common core literacy standards (including the informational text standards).

We then moved on to an activity for introducing close reading (or critical reading) in the classroom. The purpose of the activity (which can be found in Chapter 2 of Method to the Madness) is to help students…

…recognize and identify significant choices made by an author

…analyze and evaluate the effects of those choices (that’s the “So what?”)

…use the appropriate academic language (literary terms) when discussing those choices

…prepare a text for analysis by annotating it.

The activity also helps students recognize that literary terms work together–specifically, in this case, diction and imagery combine to create a particular mood, or atmosphere.

Our next activity was centered on a short story by George Saunders (whose first novel, Lincoln in the Bardo, was recently released). The story is titled “Sticks”. It’s just a two-paragraph story, but there’s a lot packed into those two paragraphs. The story was included in Saunders’ 2013 collection, Tenth of December, but “Sticks” is actually an older story that was first published in 1995.

Here’s a picture of Liz reading the story in the workshop: 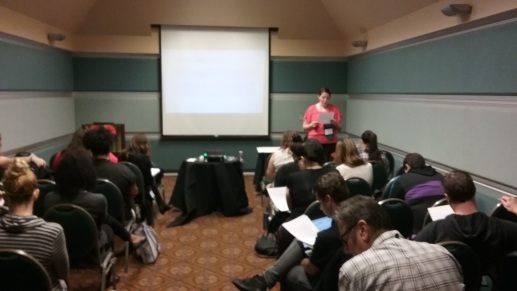 Liz and I have been using “Sticks” in the classroom for about a decade. It’s a great teaching tool precisely because it is so short while being so meaty.

For the workshop, we read the story aloud and then put the participants into groups of four. The groups had five minutes to annotate the story and identify as many literary techniques and devices as they could (they were also given a list of these).

At the end of the five minutes, each group was given a piece of poster paper, on which they were instructed to write a statement about the story. The statement had to make a declarative claim and also had to incorporate at least one literary term.

Each group then shared their statement and supported it using specific evidence from their annotated story.

After the workshop, we had a short autograph session, and we got to browse around the exhibition hall for a while (and also pick up swag).

Here’re two photos, one demonstrating my selfie abilities pre-stick, and one post-stick (and post-stick tutorial [hey, I just realized: sticks is a motif in this blog post]):

We were supposed to then post the picture on the right on social media with the hashtag on that card. But we’re getting old, and it was already a big day.

One thought on “CATE Conference 2017: Creating Critical Thinkers through the Study of Literature”

This site uses Akismet to reduce spam. Learn how your comment data is processed.